As usual, before surmising our ‘Outlook’ for 2023, we look back at some of our thoughts this time last year, one of the more pertinent being;

Unfortunately this point proved to be more than accurate with 2022 turning out to be one of the worst performing years for both equity and bond markets since 2008. As we started the year, a post-Covid global economic recovery was gathering momentum and supply chain bottlenecks were beginning to ease. Global markets reflected optimism for the most part with major indexes making new all time highs in November and December 2021. Inflation rates were rising, but central bankers were reluctant to raise rates. The theory was that inflation was “transient” and would fall when the economy normalized.

Markets began to slide early in the year, as inflation continued to rise and Russia-Ukraine tensions began to escalate. On 24th February Russia invaded Ukraine, which created a new supply chain crisis. The price of crude oil touched $129 in March, which was probably the final nail in the coffin for the transient inflation theory. The US Federal Reserve raised interest rates by 0.25% in early March - this was less than expected and markets rebounded through the end of the quarter. However, that first rate hike marked the start of what turned out to be the steepest hiking cycle in history.

As investors digested these developments, markets plunged and the MSCI world index fell 14% during the second quarter while S&P 500 fell 16%. Most major indexes around the world fell into bear market territory - more than 20% off their highs. US 10 year treasury yields rose to 3%, double where they started the year. Whilst there were some relief rallies throughout Q3 and Q4, the following table summarises the returns generated by markets in 2022 from a Euro investor perspective; 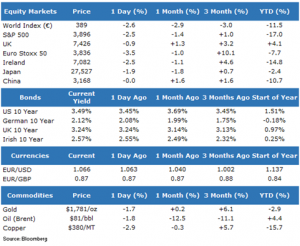 So where to from here? The word recession has been thrown about a lot and both the hard and soft landing scenarios are still very much on the table. A hard landing would mean that central banks really struggle to bring inflation under control. If that happens, they will keep raising interest rates which would put more strain on consumer spending, investment, and ultimately on corporate earnings. This would probably mean a severe recession with rising unemployment and further falls in markets. The soft landing will occur if inflation falls to a manageable level, allowing central banks to stop raising rates. Both of these scenarios could still play out and whilst economic forecasts remain mixed, some are starting to improve. The prospect of a hard landing may not seem too appealing for investors but it’s important to remember the words of our friend Warren Buffett, imploring investors to be “fearful when others are greedy and greedy when others are fearful.” Difficult periods for equity markets prove difficult times to hold one's nerve but we believe the old adage of 'Time and Not Timing' comes to the fore in periods such as these. How 2023 ultimately plays out for investors is anyone's guess but we wouldn't be surprised to see markets surprising to the upside and believe that bond markets now offer good value to investors for the first time in a very long time.

As always, our narrative is to stick to the plan, keep your portfolio under review and only make changes if and when your circumstances dictate.

In line with our own thoughts, there’s very mixed views on what 2023 holds in store for investors, see attached 2023 Outlooks from Zurich Investment Managers and Quilter Cheviot.